The War on Terror has seen a massive rise in the use of IEDs against conventional forces and as such, there was a much greater interest in the development and purchasing of mine resistant vehicles. The British Army purchased a whole fleet of vehicles designed for different roles, including a replacement for the Snatch Land Rover. Named the Foxhound, this vehicle is currently in British service. 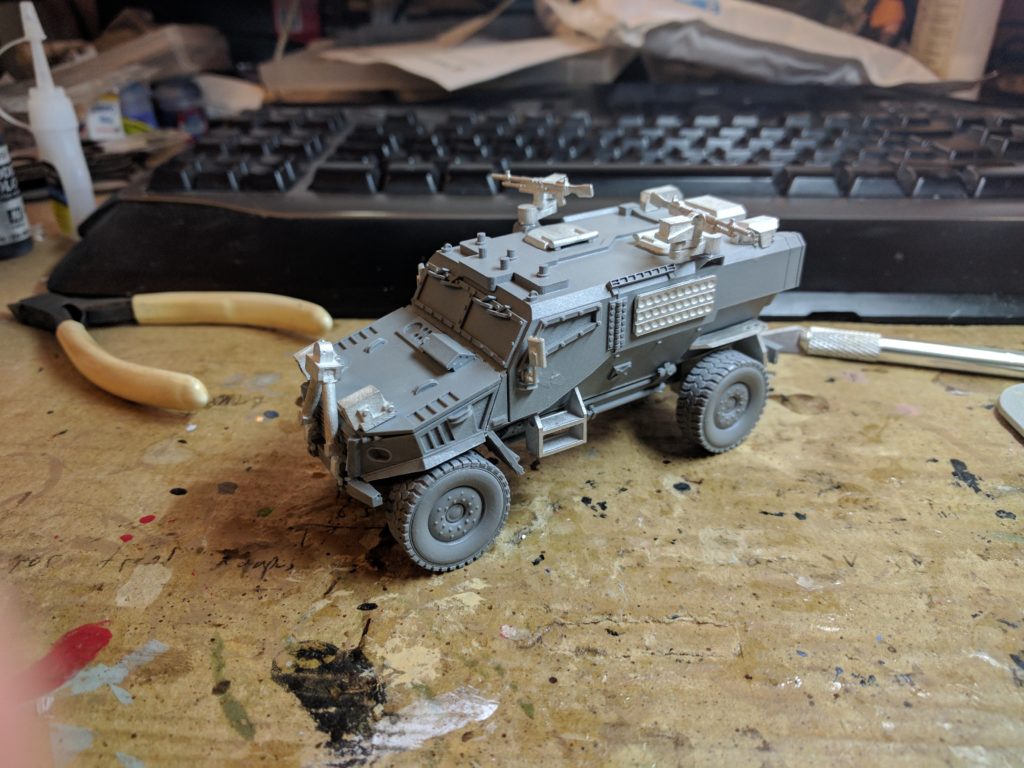 Evil Bear Wargames have previously released another vehicle from the late 2000’s refresh (The Panther) and I was very impressed with it. Lots of detail, hot swappable weapons  and super easy to assemble and paint. They have since expanded the range by adding another vehicle, the Foxhound. Although I purchased mine second-hand, it was basically fresh out the box. 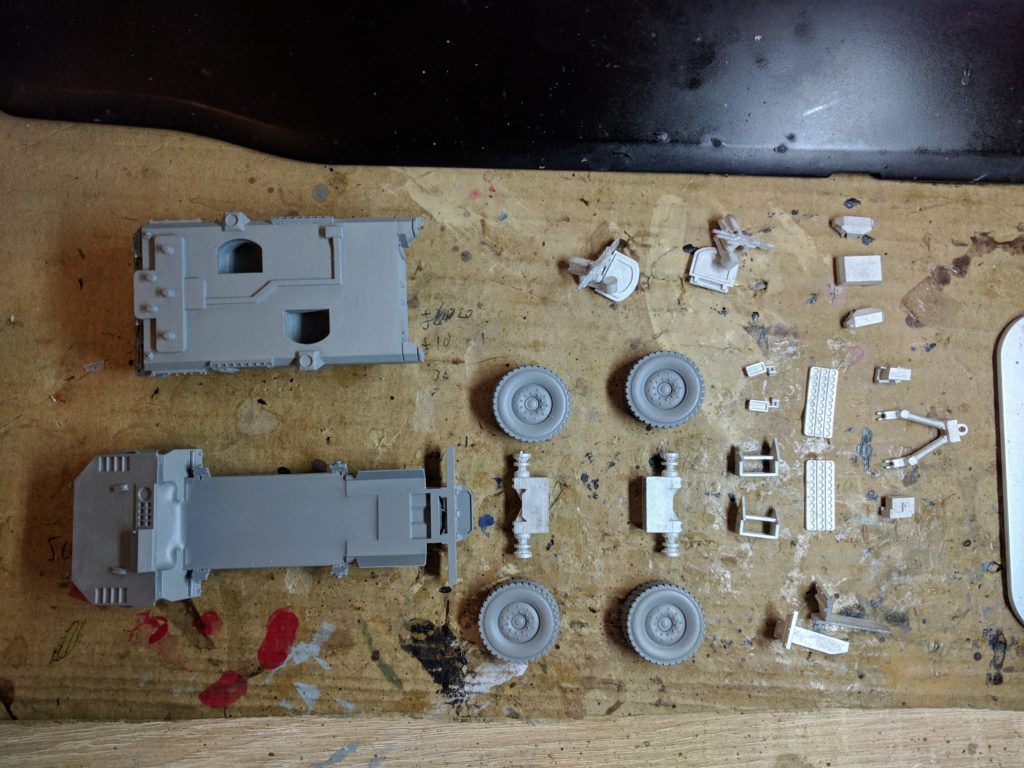 The Foxhound model is comprised of resin and metal pieces. The core hull, unlike many wargaming vehicles, is actually two parts –  the base plate and nose are one piece, the crew compartment the other. As well as hinting at the possibility of future variants (as shown on the Evil Bear facebook page) it also does a fantastic of covering up any marks from the casting process.  There is a banding texture to the resin but it should be easily covered by an undercoat.The wheel assembly is very similar to the Panther (metal central structure and two resin wheels) allowing for a great deal of detail around the axle. Most of the metal details do not have any form of mounting slots or guide positions. However, this can be a benefit if you wish to skip certain elements (such as the rear mounted boxes) and reference images are easy to find. The GPMGs on the top of the cab do have mounting guides and the top hatches can be mounted either open or closed (the hinge is attached to the hatch). There is also a good depth underneath each hatch so crew figures (such as Evil Bear’s Virtus or Empress’s British figures) can easily be mounted. 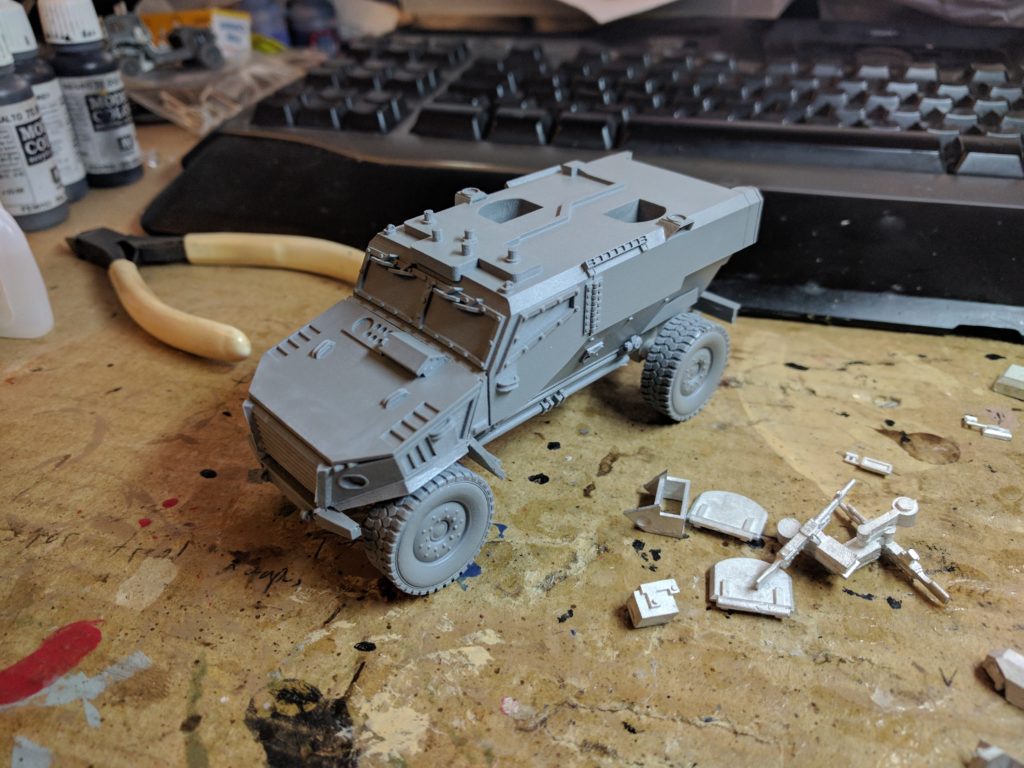 Assembly is super easy. Attach the two body parts, assemble the wheel units and attach and then add details. As I mention above, I recommend doing it with plenty of reference to make sure everything goes in the right place. Once built, it’s an impressive beast. As you’ll see below, it maybe on the smaller side of Mine Resistant vehicles but it’s still huge.

The completed vehicle all good to go. 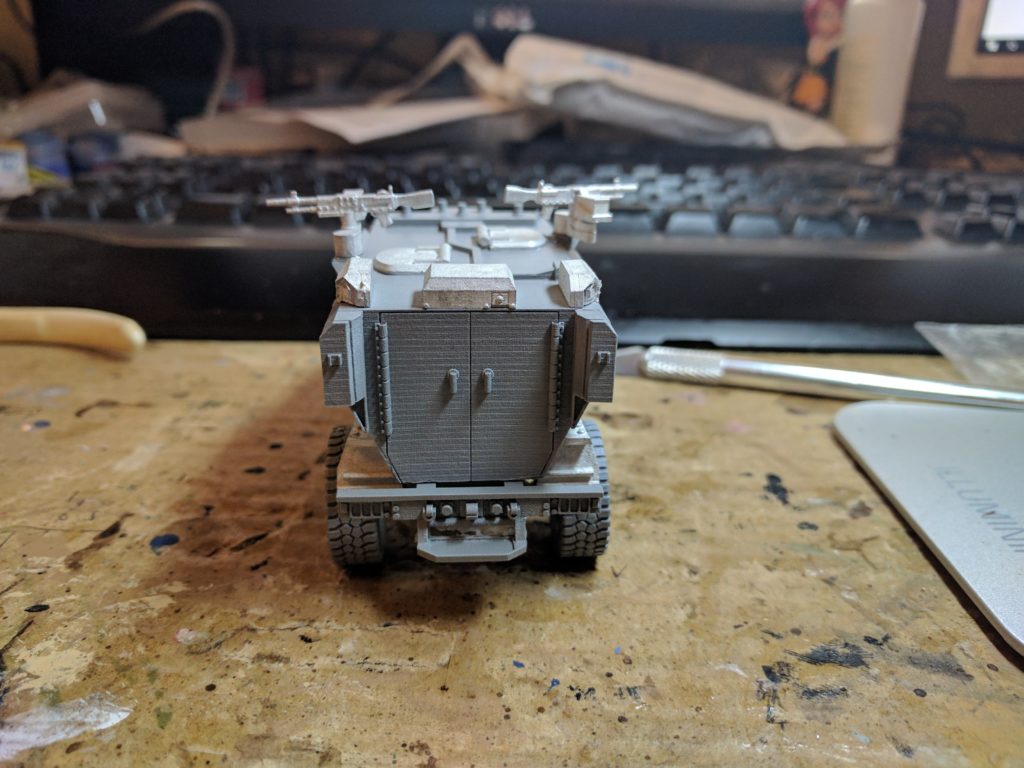 Some of the texture is visible here, expect an update once painting begins. 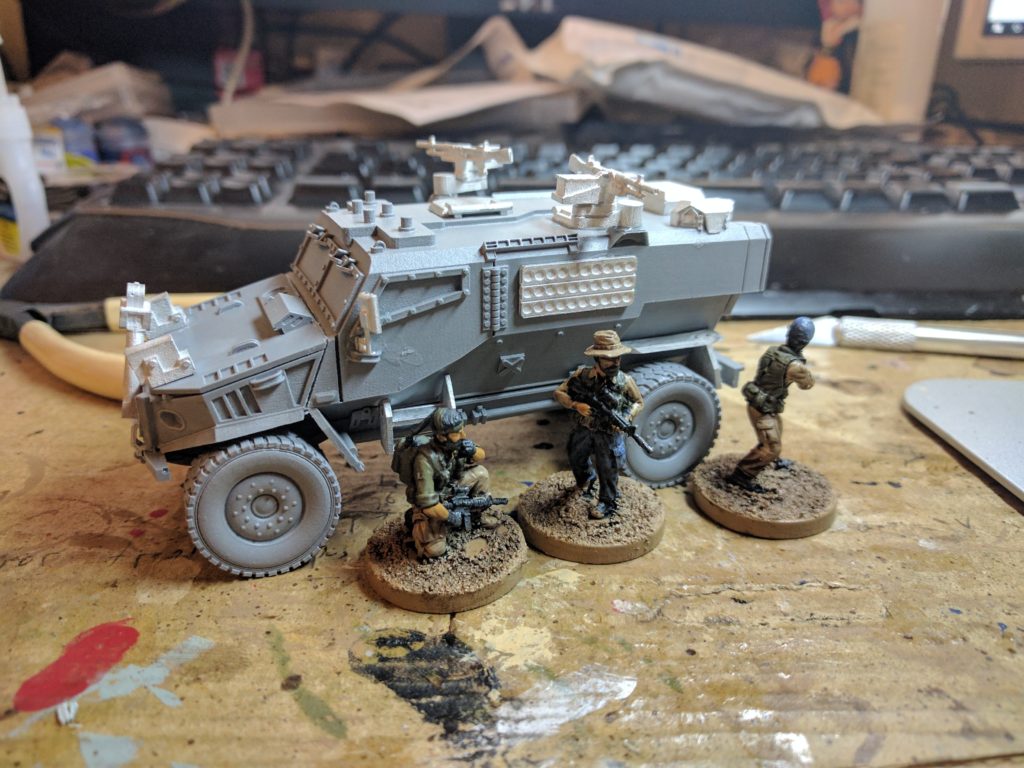 Seen here next to some of Empress’s SAS figures. It’s a real monster. 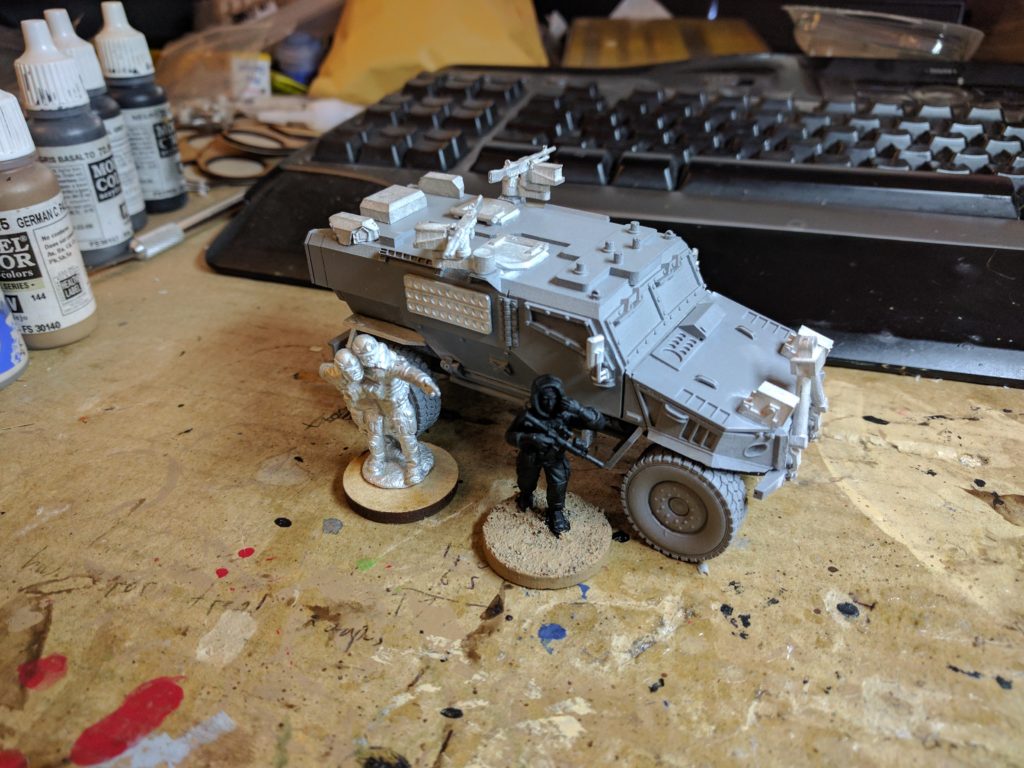 Empress US Ranger and Spectre Task Force Operators to show the height of this thing. 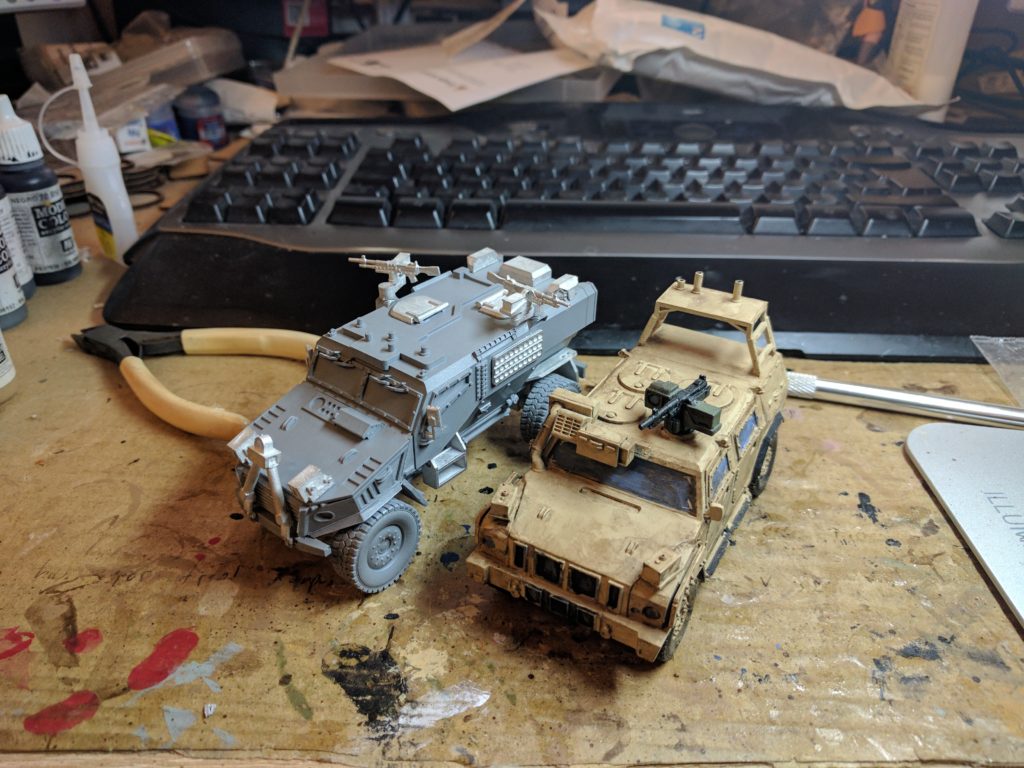 Next to its little brother in the series, the Panther. Looking forward to these two rolling round the board together. 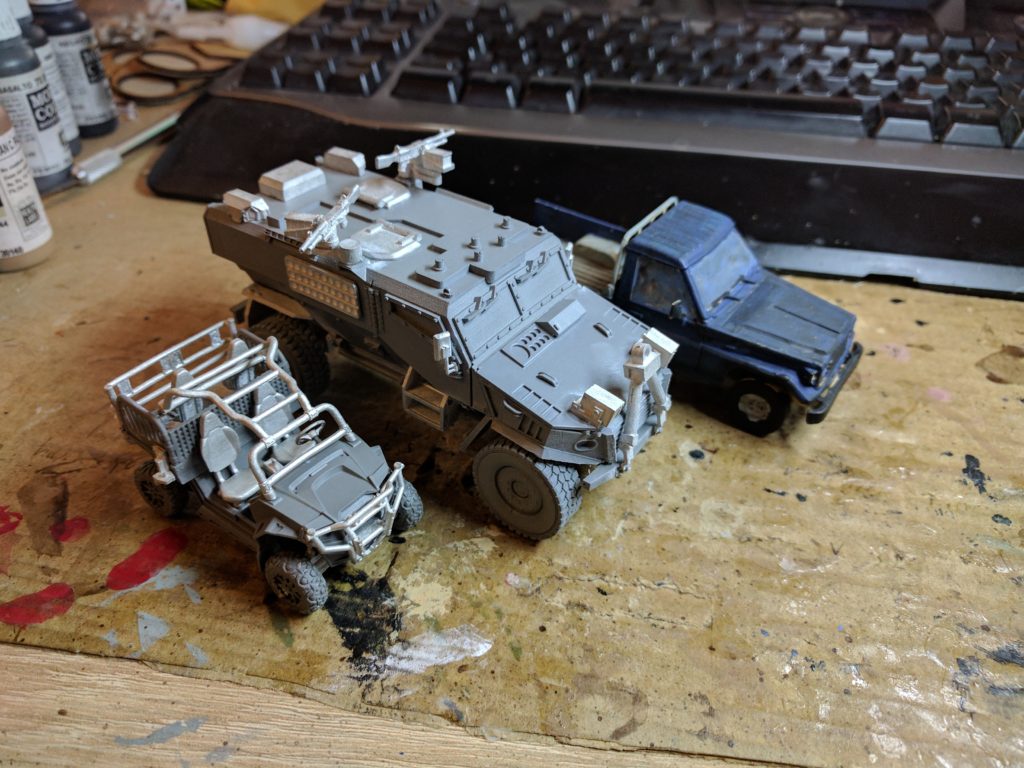 Next to the Spectre buggy and Technical Alpha. Shows just how tiny the buggy is. 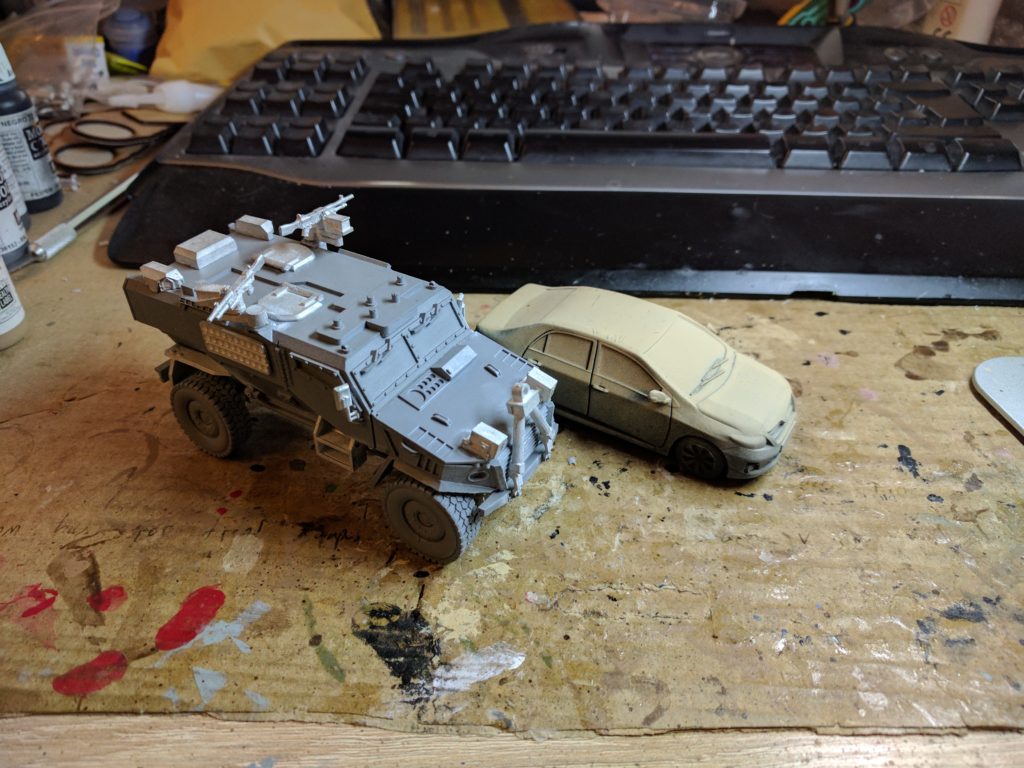 Finally, the Foxhound next to a Spectre Civilian Car. Expect to see the Foxhound doing a monster truck impression when the bullets start flying in a crowded street.

So overall, what do I think? Once again, I’m consistently impressed with Evil Bear’s output. The Foxhound, despite its very minor flaws, is lovely to build and great to look at once constructed. I am seriously thinking about getting a second one for larger games and to add to any convoy I might need. Additionally, it’s generic enough to work as a protected vehicle for any contractors needing a protected patrol vehicle.

Wanting one of your own? Evil Bear has two version in stock – a vehicle by itself (at £31.50) and a version with two crew figures in the British Army’s new body armour (at £33.50). There is also an offer comprised of two teams of infantry and two Foxhounds for £75.