The final part of Spectre’s November releases was the SAS Counter Terrorism Response team. These guys may be familiar to those of us in the UK who watched the news earlier this year and noticed the guys in tactical gear alongside the police. All the operators are wearing civilian clothing (with no kneepads and only a few pockets on the trousers) with plate carriers, battle belts and helmets to help them perform their role. The team also wear mesh facemasks which is an unusual choice as it’s an item more commonly seen on airsofters. However, it does a good job of protecting your face from debris and doesn’t fog up your eye protection. This is in addition to the balaclava’s benefit of masking your ID. The operators have varying levels of armour; As well as the basic plate carrier and helmet, some figures also have applique armour panels on their head and/or the pelvic armoured plate. This really helps to make them look like they are ready to rumble. The range has three packs at the moment: 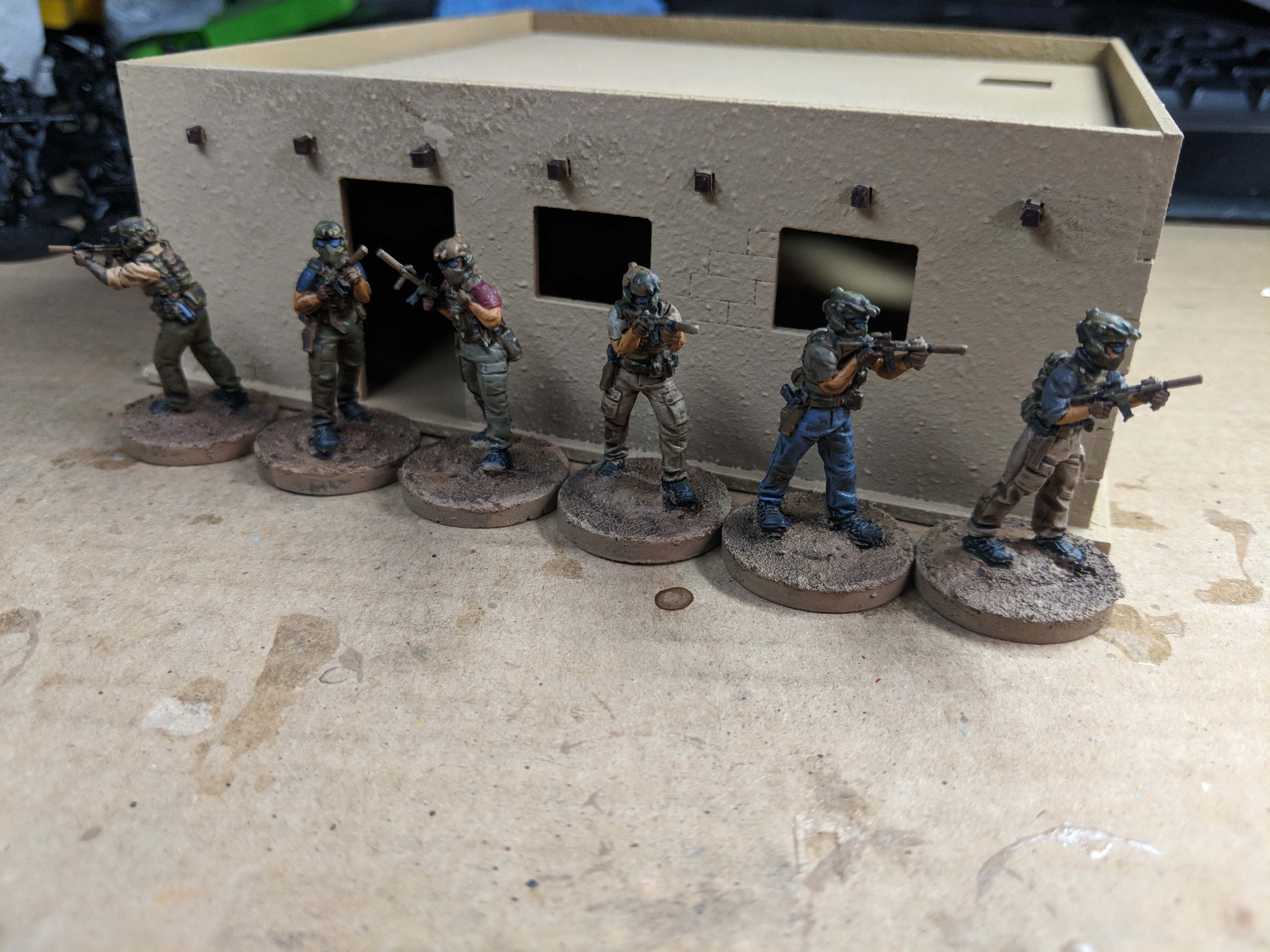 The main set is 6 men strong, in a variety of poses (three aiming, three in combat poses). All are armed with L119A2 short carbines, complete with lasers, torches and red dots. Some of the figures have assault packs. As always, there is plenty of variation in terms of webbing layout and pouches. An important thing with any multi-figure sets, the operators look great when deployed together – even all the shooting poses are varied enough that they don’t look like carbon copies. 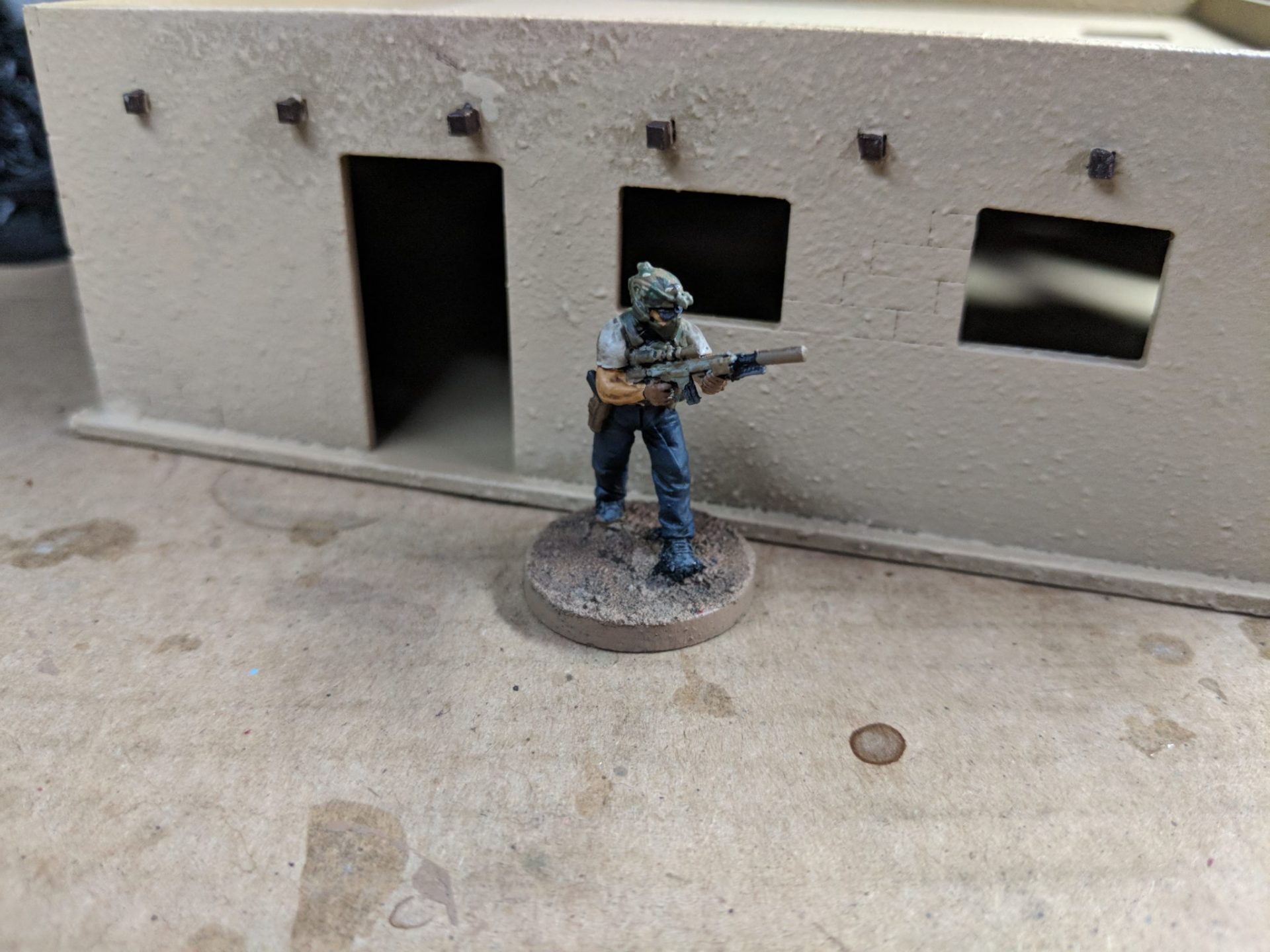 The first backup pack for the team is a marksman. Armed with a HK 417 DMR (with scope and laser), the marksman will help to back up the rest of the team. I love some of the details on this figure – you can even see the engravings on the AFG on the bottom rail. 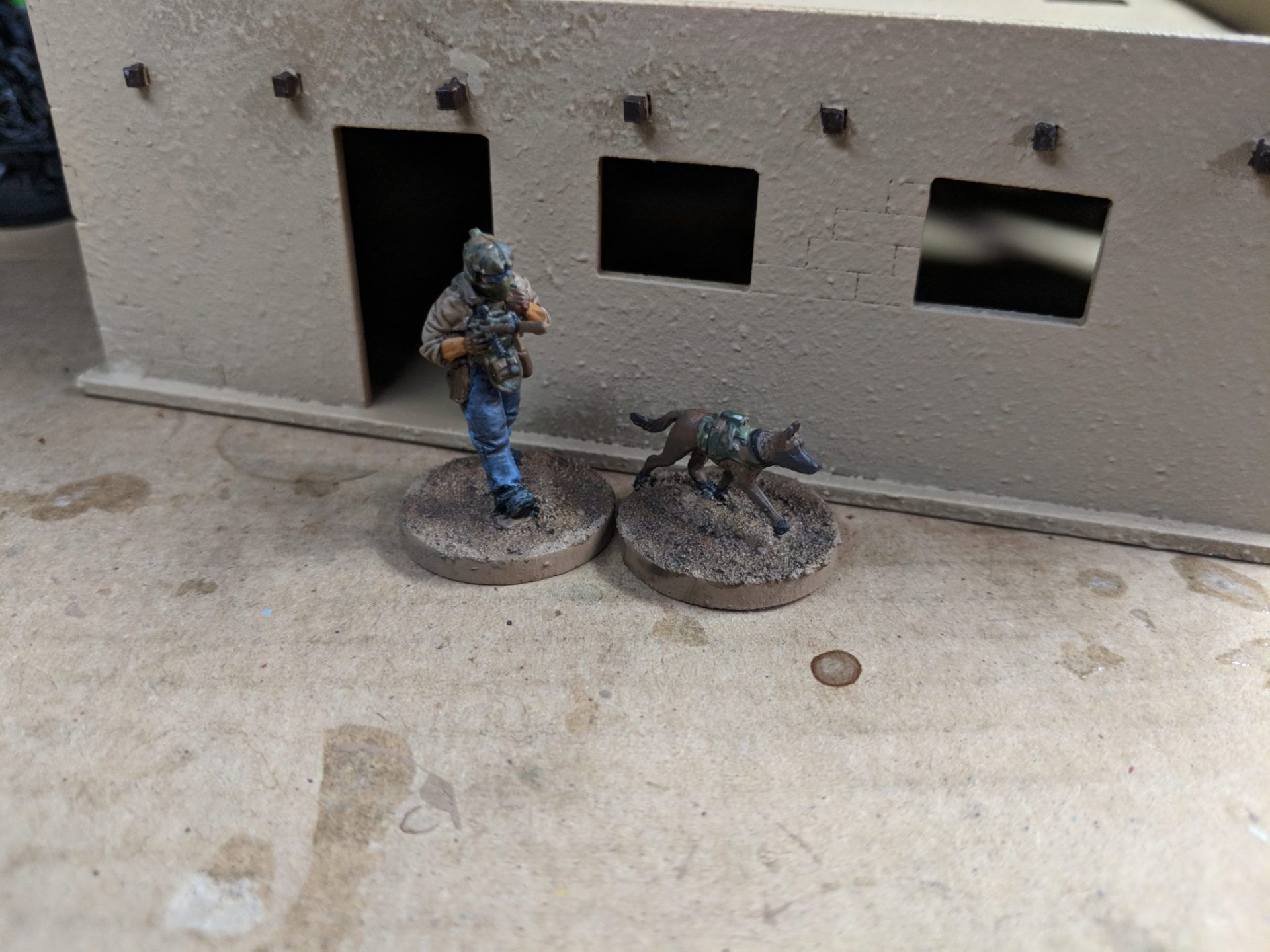 The final Response team pack is a Dog Handler and Malinois multirole dog. The dog is a new sculpt, an improvement over the original one early purchases of Spectre may have received alongside their K9 Handlers. It looks a lot more dynamic than the original one. The handler is also really cool – he’s got both the applique armour AND the pelvic plate. Combined with the UICW (a super short M6 carbine) he’s using, this figure will pull great double duty as a point man for your team. 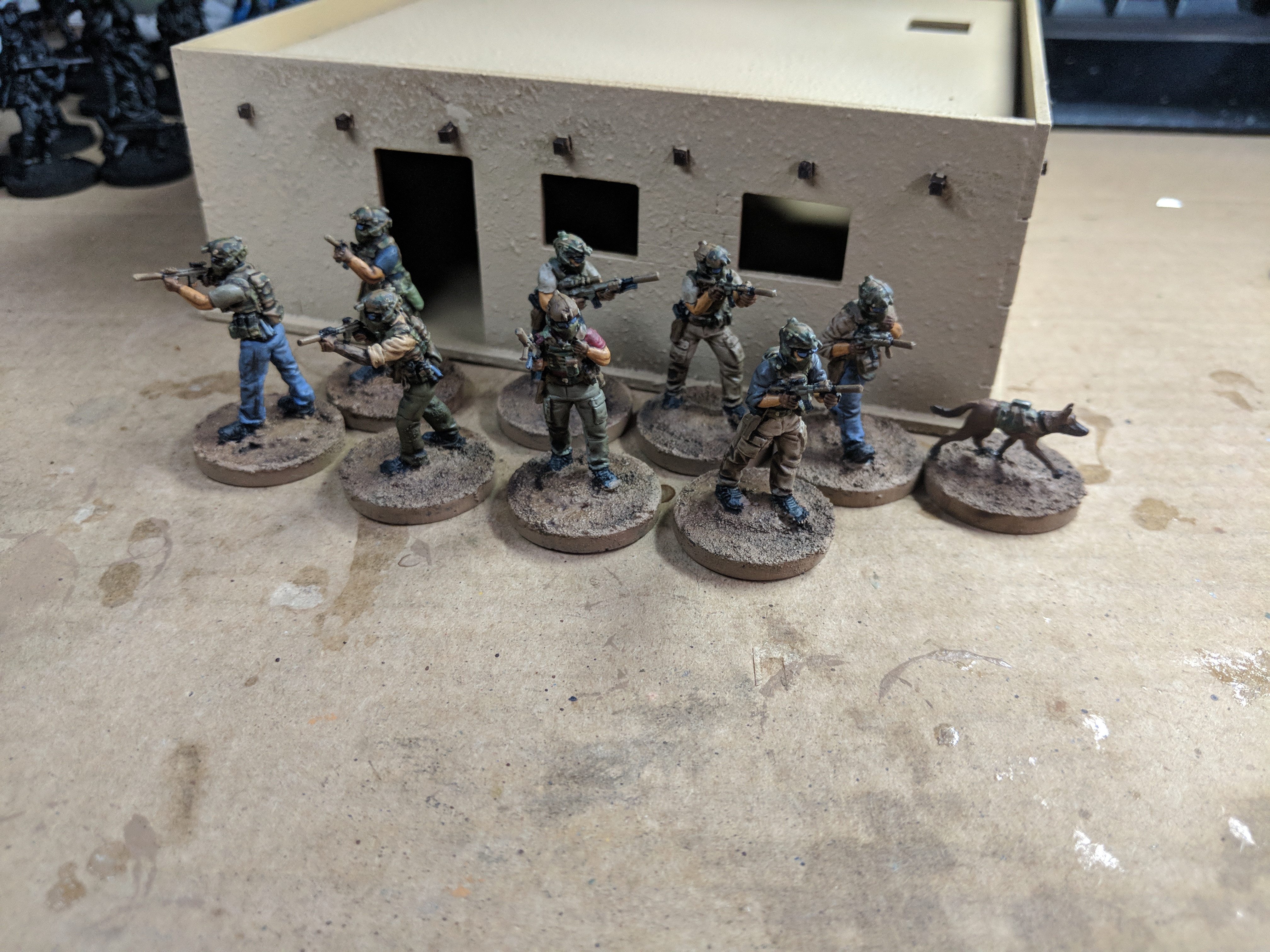 For painting, my main focus with these guys was the eternal issue of making teams not in uniform still look like they are part of a team. The multicam webbing and helmets help, but I also did the trick of using the same palette of colours – for example I’ll use one colour for a figure’s trousers and then reuse the colour for someone else’s shirt. US Field Drab was used for the holsters and the multicam was done using the Spectre method. As with all my figures, I finished them off with a dousing in Agrax Earthshade to bring out the details and soften the edges of the colours. 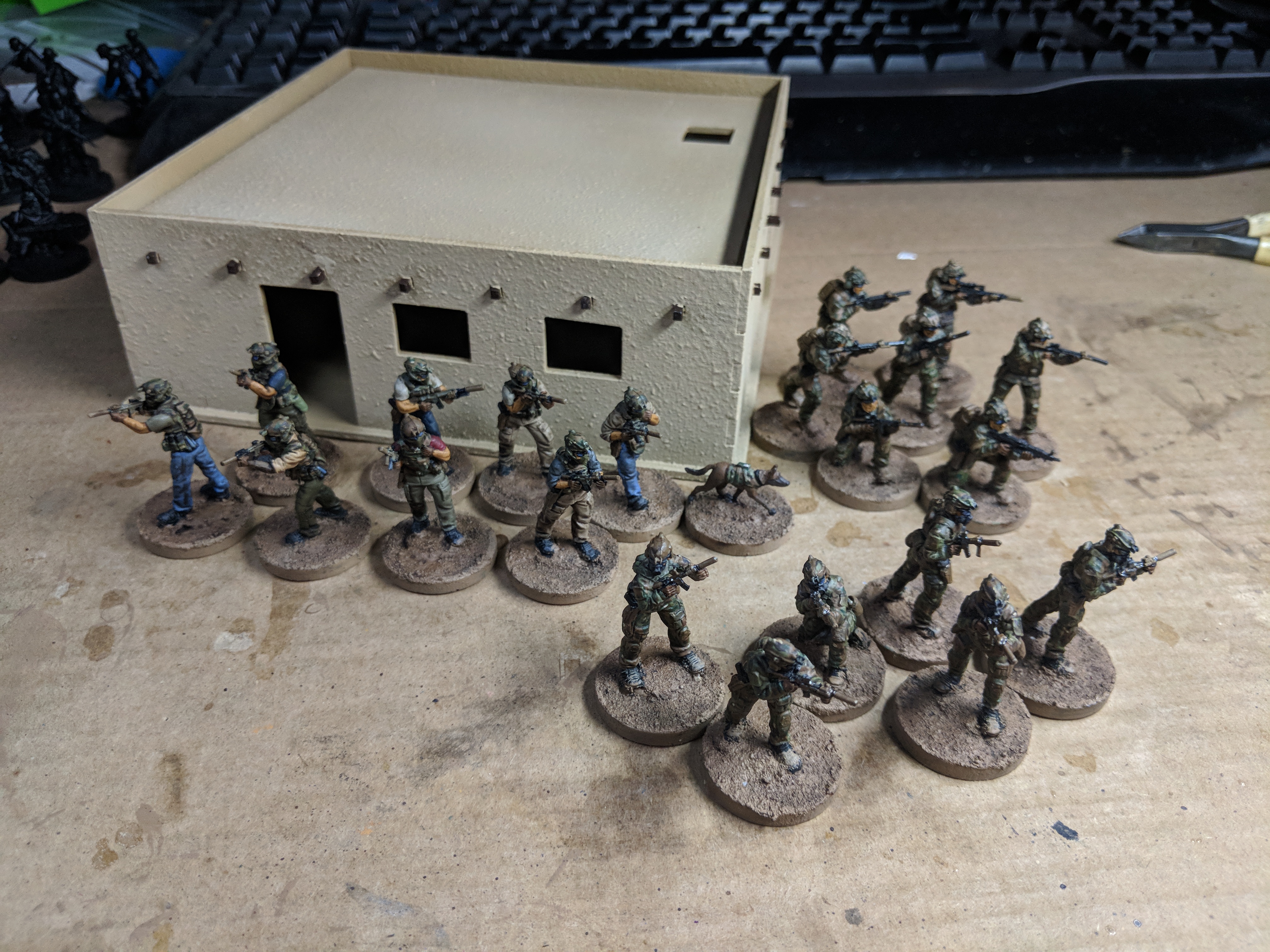 Now I’ve finished all three packs, I think it’s time to pick my favourite of the three groups from the UKSF collection. Despite the coolness of the Assault squad in respirators and the dynamic posing of the Rural Ops (as well as the good mix of weaponry), the Response team stands out. I love the combination of civilian clothing and tactical kit. Alongside the two additional packs, this helps to make the team a fantastic set for anyone running close quarter actions. As with all the ranges, I’d love to see some more support operators for the Response Team. Operators with breaching gear or carrying larger rucksacks to stand in as a medic would be a great addition. As well as the traditional role as CT Response, these guys would also work for some covert agents. They look like they have just thrown their tactical kit over their street clothes. Look for them on the streets of Bazistan and Zaiweibo, ready to swoop in and snatch intel while under fire. This is one set I’m excited to get on the table.